Of Gods, Trees, And A Sapling Now Available in eBook Format! 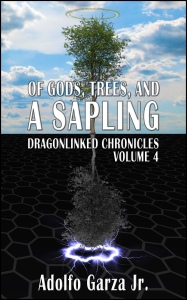 It took some time, but the eBook version of the latest book in the Dragonlinked Chronicles series, Of Gods, Trees, And A Sapling, is now available at Amazon.com (and all amazon sites, actually). The trade paperback version will be available within the next couple of weeks, depending on shipping times and whether I have to make adjustments based on the sample.

Many apologies for how long it’s taken. There are two main reasons it took as long as it did for me to finally finish this book. The first is that my life has been ridiculously hectic these past eighteen to twenty months or so. I won’t bore or bring you down with the details, but suffice it to say I wore black a lot and made a few trips to visit relatives in the hospital. There were a lot of days where I struggled to write.

Now, the biggest reason it took so long–and I mentioned I had suspicions about it in a previous post (which turned out to be true)–is the length of this book. In between uploads to Amazon after tweaking the format and fixing the two spelling errors that somehow sneaked through, I started work on another document, the trade paperback version. My preliminary pass at formatting that version indicates that, in print, this book will be seven hundred and seventy-three pages long. That’s more than double the length of book 2. I suspected it might be longer than book 3 based on how long it was taking me to complete a read-through, but it didn’t feel that long to me while I was reading it. My test reader’s only comment that was even remotely related to the length was that she couldn’t stop thinking about getting back to reading it in between her job as a substitute teacher, working on starting her business, and picking up her kids. So, she apparently didn’t think it felt long either.

At any rate, here you go. ENJOY!

(And for those of you who want a physical copy, I will continue working on the trade paperback version tomorrow, I swear!)

P.S. OH!  If any of you followed me on my Amazon author page and you did NOT get notified about the release, could you please post a comment below? If some of you were not notified, I want to speak with Amazon and find out if there is anything I can do to fix it. Thanks!

I just completed a pretty darn clean read-through. All I found were minor word-choice issues, and in one ‘action’ scene, I made some minor tweaking to the order of sentences for pacing. As much as I dislike that it’s taken two months to get to this point, what has transpired has only reinforced my assertion that you should never, ever discount the value of doing your own read-throughs nor should you discount the value of test readers.

Performing your own read-throughs of a complete manuscript lets you get a feel for the entire thing, see its flow, see the various plot-lines and how they interweave, and see how the multiple story arcs progress all together. I have read the complete manuscript six times since the first draft was complete at the end of August,  and in every read-through prior to this last one, I found something fairly big. Particularly with how a certain investigation was progressing, I found places where what was in my head had not made it clearly to the page. I found places where in my zeal to describe a cool new thing, I gave away too much ahead of time, and so when the character ‘realized’ something about it, that realization made no sense because that something had been described prior. And when I decided to add a little scene near the end to give a certain character a chance at a bit of payback, I realized a major plot had a major hole. All those things I corrected.

I also got my test reader feedback. Fresh eyes see things that the author’s do not. So many things. Wrong character name used in speech tags, a case of the wrong verb tense (I change sentences around a lot and sometimes forget to check if a verb tense needs changing based on the new structure of the sentence), confusing sentences (this is sort of a period piece, so the language used has a hint of that, but sometimes just saying it simply is the best course), and the most important thing found was just a ridiculous over-usage of a certain action tag. Like a speech tag, an action tag ties a character to a piece of dialog, but it does so with action (an example with a different action tag: Aeron blinked. “You want to do what?”). It took me something like three hours to search that tag out across the entire manuscript and decide whether to keep it as it was, to replace it with a different tag, remove it completely (just leave the dialog), or to rewrite that part a bit. It took so long because I had to be careful not to over-use the fixes for the over-use. At any rate, I addressed all the feedback in one way or another.

All of that means the manuscript is complete. Now, I just have to come up with a cover blurb (working on that), finish the cover (98-ish percent done), and decide whether what I have now as a title will remain the title (no spoilers!). The trade paperback version will take at least a week longer because I have to get a physical sample of the book shipped to me so that I can check the printing of the cover (including alignment on the front, back, and the spine, and where the cover image is cut at the edges) and the interior before approving it for sale. BUT. I should have the e-book version on sale by the end of the month. I have been working really, really hard to make that happen. Along with familiar faces, there are some new characters that I think you’ll like a lot, I know I do, and I can’t wait for you to meet them.

Anyway, enough blabbing. Back to finishing the book!